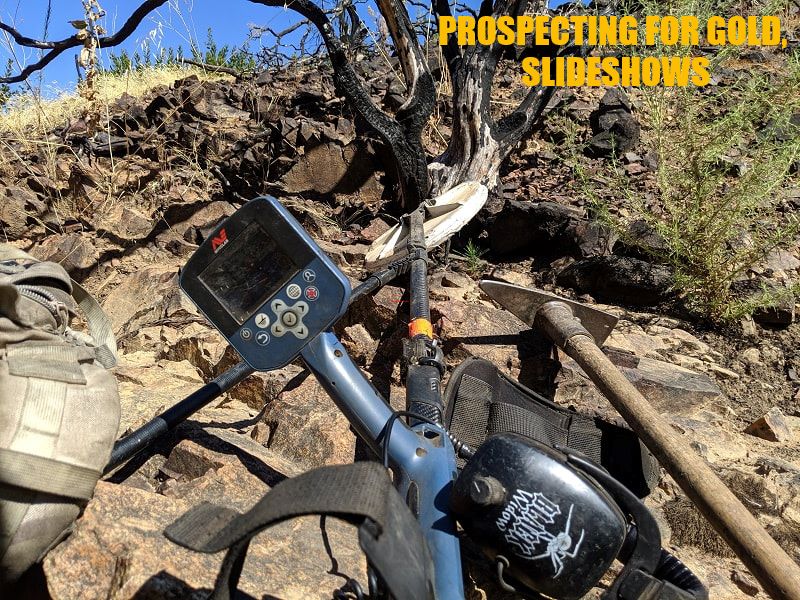 This waterway is a neat place to snipe for gold with a mask and snorkel. I have also worked some nice holding crevices with hand tools above the water line. A twelve pennyweight nugget was found here with a Gold Bug Pro.

This small placer cut is located immediately below a ridge top that is still covered with ancient gravels. All the draws leading off this ridge top had been worked during the old days. There are still nuggets being found in this area by those people that go low and slow.

Here is a long and slender piece of gold that came out of a white clay bank in Northern Nevada.

This area was good for seven pieces of gold, all dink's, down deep in the bedrock requiring lots of work.

This open ground was located at a local farm. It was placer with a few lines of pocket gold that crossed the gullies at a few spots. There were some real nice pieces that came out of this area.

It was a cold winter morning when these pictures were taken. A friend and I were on a flood plain that had bedrock outcroppings here and there. The gold was small and wedged in the cracks of the shale. We were using GB Pro's.

Here is a short running crevice that contained lots of lead bird shot along with some nice coarse gold. Using a detector helps to narrow down areas that may be more profitable.

The gold was encased in almost solid granite bedrock, five pieces, three hours later along with lots of blood and sweat.

Here is another little piece that sounded great but took a lot of time to get out of the bedrock. Found with the GB Pro. Hunt those hairline fractures in the bedrock not just the obvious.
BUY MY E-BOOK NOW
BACK TO THE TOP